You’re Invited To A Dinner For Diggers

Gaye Chan wants to take us back in time. All the way to the 1600s, when common spaces began to disappear and people started to lose their access to things such as water and farmable land. It was before the constructs of “State and capitalist regimes” took it all up, as Chan and her creative partner, Nandita Sharma, call it.

Chan, the chair of the art department at the University of Hawaii, and Sharma, an associate professor of UH’s sociology department, founded Eating in Public in 2003 to “create the commons wherever we can,” Chan says. “It’s to rekindle our desire for the commons and to retrain us to know how to be commoners. All of us who are alive, certainly in the U.S., have no experience with the commons. We have no idea what it even means. So all of our projects are about recreating the subject of the digging.”

Diggers were 17-century predecessor socialists to Chan and Sharma who got their name from farming on common land, but anyone else who “had access to the commons and it was taken away from them” are diggers, too. “Its form of resistance was to continue to use the space as a way to share,” Chan says. 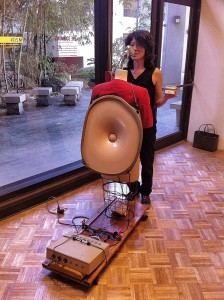 Is it anarchy? Chan doesn’t want to define it in such a broad term, but concedes that “EIP has always challenged the authority of the state, and that is an anarchist sentiment. It’s not the type of bomb-throwing—it’s not about destruction. It’s a creation of the commons. [...] It’s radical trust, and as I say in my talks, that in a society like ours, it’s so filled with fear and paranoia. I think trust might be the most radical act of all: to trust without condition.”

People who grow fruit along the Likelike Highway are diggers, for example, as is anyone who takes fruit from a public tree and uses it in their meal. “Some people may be digging without knowing it,” Chan says.

You might recognize some of EIPs projects: the Hi-5 baskets and “Take, Leave, Whatevas” signs near your favorite bus stop, or the Share Seeds boxes, where you can put some seeds into envelopes and leave them for other planters to take or take seeds for yourself.

Their most recent project, called The Commons, and held in the appropriately, yet coincidentally-titled Commons Gallery at the University of Hawaii’s Art Building, is a 10-day exhibition, where the art is the idea that shared knowledge is power. It started last week and runs through Thursday; “self-sufficiency” demonstrations have taught or will teach people how to do anything from making chopsticks out of bamboo to making Ti-leaf plates and wine from foraged fruits—without purchasing many of the supplies.

It culminates in a Diggers Dinner, a potluck where anybody can bring food to share as long as the main ingredient was something you have grown yourself, fished, hunted, foraged or found, bartered, been gifted, or stole. “So basically, at least one degree of separation from money,” Chan says. 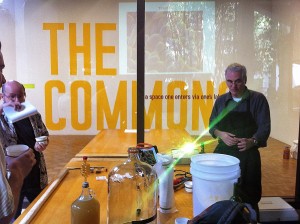 John Szostak, an associate professor at UH’s art history department, will serve mango wine that he made from fallen mangos and honey he earned in a trade. (Some of it is nearly 15% alcohol, thus really good.) Another professor, Jaimey Hamilton Faris, is making bread from collecting flour from her neighbors. Some are planning to bring items made from foods found in plants on UH’s Manoa campus; you could have someone cook something for you in exchange for something. 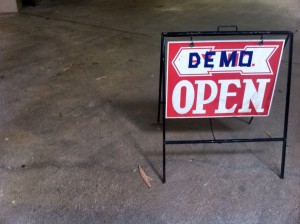 You’ll also get to explain where your food came from. It’s an experiment certainly, and Chan says she doesn’t know what to expect. “I don’t know what’s going to happen! Most people find it a bit difficult because of the rules—we’re so accustomed to living within the market that it’s hard for us not to rely on it. The difficulty is intentional. We’ll see how people solve this problem if the food is tasty!”

The workshop schedule is at nomoola.com. The Diggers Dinner is on Thursday, 6-9 p.m. at the Commons Gallery at University of Hawaii at Manoa, free—that’s the point.