This was the 7th year that Tokyo Midtown held its annual art and design awards, but the 2013 prize marked the first year of a new collaboration between Tokyo Midtown—a huge urban mixed-use complex in Roppongi, Japan, composed of business offices, retail establishments, restaurants, and residential units—and two of Hawaii’s important players in the local arts and culture scene: the Halekulani Corporation and the Department of Art and Art History at the University of Hawaii at Manoa.

Winners of the competition were awarded grants to pay for the expenses associated with the production of their proposed works, and out of 293 applications, 12 works were selected and six awarded special recognition prizes and the chance to exhibit at a major public space within Tokyo Midtown. The grand prize was an opportunity to come to Hawaii to participate in a 10-day long art program hosted by UH’s Department of Art and Art History. The program included studio visits with the department’s MFA students and a chance to deliver an artist talk to UH students, faculty, staff, and Honolulu community members. At the end of the presentation, members of the audience were invited to bring forth any questions or comments with topics related to the art making process, preference in materials, historicity of the work, and concept development being addressed.

This year, Ichitaro Suzuki won the prize and gave a presentation at UHM on his award-winning sculpture, a 21st century interpretation of the famous (by art historical standards) 1st century Hellenistic-style statue Laocoön and His Sons. In Suzuki’s sculpture, titled A Monocular Landscape: Gruppo del Laocoonte, the ancient Greek story of Laocoön is referenced to describe the current state of 21st century Japanese society.

Suzuki explained in his artist statement that the current contemporary state of Japan’s “[values of] convenience, are afraid, and so they do not seek to know the truth. This work, depicting an empty-looking sculpture of Laocoön that has no sense of physical denseness, is my cynical message to the people of today.” 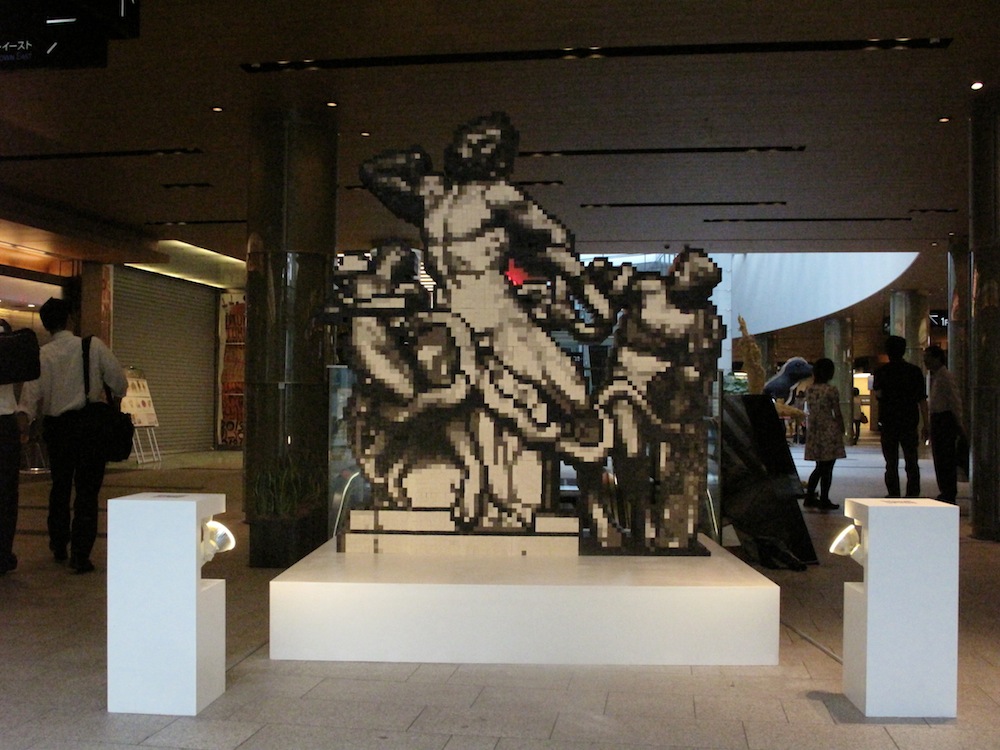 Suzuki used acrylic paint in the production of A Monocular Landscape and applied it to rectangular shaped blocks of Japanese cedar wood. Its size accurately corresponds to the dimensions of the original piece by sculptors Athenodoros, Polydorus, Agesander of Rhodes. Suzuki’s painted blocks were then placed and locked together in a grid-like arrangement, giving it a pixelated appearance attributed to the artist’s personal interest in collecting 8–bit-era video gaming consoles.

The piece by Suzuki, who is currently in his last semester of completing his MFA degree at Aichi Prefectural University of Fine Arts and Music, offers a critique of Japan’s art education system, particularly its blind following of the Western-focused teaching methods and curriculum established early on in Japan’s modernization period. (Following the Meiji Restoration in 1868, Japan set itself on a rapid path toward both westernization and modernization, absorbing a plethora of ideas originating from the west.) The concept behind A Monocular Landscape is embedded in the issue of the continued use of western classical art models in Japan’s art education system through Suzuki’s fabrication of a distorted version of Laocoön and His Sons. 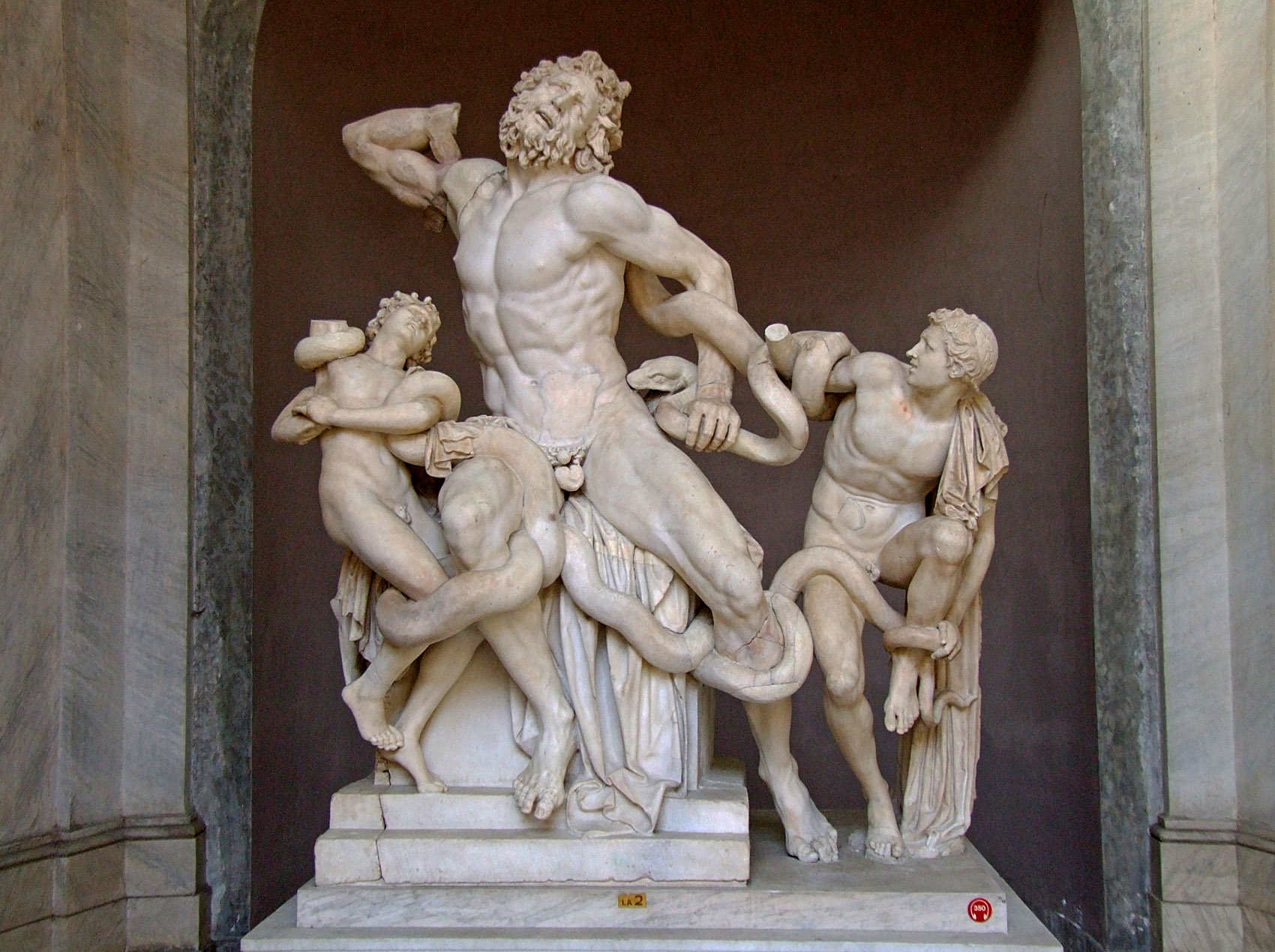 The original Laocoön story has no cultural reference for Japan, and the image functions as an empty sign, lacking any symbolism or historically contextualized meaning. The work itself challenges the viewer to identify the image and question the relationship between the warped appearance of Laocoön and how Suzuki, who, at 25, is the youngest artist among the Tokyo Midtown winners, interprets his work, situating the piece in the theme of the competition, which was “City”. Suzuki’s age was a surprise for many students including studio-art major Stacey Horimoto, who was both shocked and surprised by the young artist’s strong ability in articulating a concept that pairs art historical references with social critique. In response to Suzuki’s talk, Horimoto said that his work was “relatable and refreshing because it combined a familiar image from art history with his personal interest in video games which, in turn, aided in representing his view of Japanese society.”

The goal of the Tokyo Midtown Award is to support the growth and development of Japan’s young, up-and-coming artists. They only accepted entries from artists between the ages of 18 and 39 years—the average age of entrants this year was 28.

There are many activities and events capable of being explored with this newly formed collaboration between Tokyo Midtown, the Hakelulani Corporation, and UH, especially for art students. Next year, it would be interesting if organizers explored further ways that UH students can benefit from this partnership, say if Tokyo Midtown hosted UH student art exhibitions or established an internship program geared toward UH students studying art history and art who are interested in entering a career in the gallery world. Fostering programs like these would enable UH students to gain a global perspective on the nuts and bolts of the international contemporary art world and help in determining where exactly they fit into this puzzle.

Despite minor language barriers, Suzuki expressed that the most rewarding aspect of winning the grand prize for him was the opportunity to come to Hawaii and engage in dialogue with the UH art students about the general practice of art. While here, Suzuki observed that “Japan and Hawaii are unique places because we are both islands isolated by water from other land masses—our histories are similar in regard to upholding tradition in arts.” It is a realization that, no matter where they’re located in the world, young artists everywhere encounter much the same issues.

This article is produced in collaboration with the Art History Club at the University of Hawaii.