Alex Chaves wants to talk about his paintings, but not in words. For anyone interested in hearing more about Coppertone Girl, his show currently on view at SPF Projects in Kakaako, the painter would like to take you to court.

Chaves says he’s trying to find new meanings in his work. “By providing a different site (a public, non-art space) and myself as a tennis player, I think new meanings about my work could emerge,” he says. “Often exhibitions are presented with an artist’s talk or public program to provide context and enrichment. I’m trying to avoid that standard ingestion of the show.”

But why tennis? “It’s one-on-one and intimate,” he says. “While playing, we could discuss any numbers of things. Inevitably, we will communicate verbally, but by playing together, we’d also communicate physically.”

Chaves, originally from LA but visiting in residence at SPF Projects (where all the work for Coppertone was created), says he spent a lot of time in Honolulu playing tennis at Ala Moana Beach Park, where the sport “became a point of analytical interest in creating the imagery of Coppertone Girl. I like the humor of this move, too: Is he serious about playing tennis with anyone? Some of the work in the show operates along these lines of feigned utility, casual collisions, and sexualized athletic prowess.”

In many ways, Coppertone Girl is a question of how painting relates to a hectic, scattered, and self-absorbed society—all against the beautiful backdrop of a Honolulu paradise.

To schedule a tennis match with Chaves, email [email protected]. Coppertone Girl is on view at the gallery, 729 Auahi St., through Nov. 17. The gallery is open Tues.–Thurs., 7–11pm, Sun., 1–5pm, and by appointment. 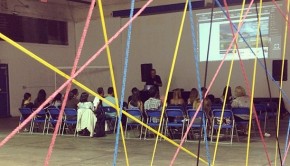