A HaiQ&A with Comedian Rhys Darby

Rhys Darby played Murray Hewitt, the band mis-manger from HBO’s incredible Flight of the Conchords, before there was even a Murray Hewitt. When FOTC was but a wee 2005 BBC radio show and Darby co-wrote it with creators Bret McKenzie and Jemaine Clement, the character was known as Brian Nesbit; Darby’s breakout role was as Jim Carrey’s boss, Norman, in 2008′s Yes Man. It’s no surprise that the stand up comedian has realized such success; his brand of comedy is like a cartoon IRL with over-the-top sound effects: An audience can simultaneously relate to and feel pity for his expressive face and awkward moments. He’s bringing his act to the Doris Duke stage for one night on his way to a tour in New Zealand, and he took some time to talk with the Offsetter’s haiku philosophy correspondent, Kimberly Kim, about his career, his life path, and what sets him apart from Murray (apparently, it’s something called an afrienda).

How would you describe
Your comedy and stand up
But in haiku form?

How has your stand up
been affected by your work
on television?

It’s enabled more
people to come along.
They think they know me.

Murray on TV
and the real life Rhys Darby:
How are you alike?

I am Murray but
Murray is not me I guess
He has an afrienda!

There were only two
seasons of FOTC,
but will there be more?

We told our story there
and the end it was quite clear
but was it the end?

About the rumors
for a film: What are the odds?
It needs to happen.

In this case it was
just rumors I’m afraid.
One day though maybe.

How did you come to
know Bret and Jemaine yourself?
Tell us the story.

We worked together
in Edinburgh you know.
Kiwi comedy.

You use sound effects
in your stand up. You should write
a haiku in sounds!

Writing sound effects
doesn’t have the same results.
Brrr brrr there you go.

Karaoke is
way important to us here.
What’s your go-to song?

Jefferson Airplane
White Rabbit is so good.
I like to dance too.

What’s your favorite
Thing to eat in the whole world?
(we love to eat food)

I’m a big meat man.
Pork is my favorite dish.
Pineapple is yum!

Might be too cold though
I’m not a big ice fan.
Bikinis though eh?

Between Oahu
or New Zealand: Which island
kicks the other’s ass?

It depends if we’re
playing rugby my friend.
The mightiest wins!

Kimberly Kim is our haiku news correspondent and philosopher. Much like Oprah but / more than 800 years old / and more genuine. 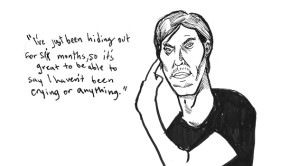 When Nextdoor Closes, Another Opens: A Q/A with Chris Kahunahana → 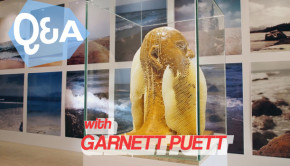